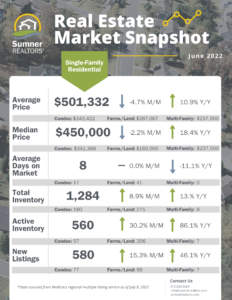 Total inventory (1,284) was up 9% in June compared to May. The 560 available single-family properties considered as active inventory (listed for sale and not yet under contract) increased 30% from May to June and 86% compared to a year ago.

“National analysts expect a slowdown this summer and through the remainder of the year because of so many economic factors including rising inflation and interest rates. We can see and feel the market shifting here. Housing demand remains incredibly strong in Middle Tennessee, however, partly because of so many people looking to relocate here from other parts of the country, so the overall decline in activity will be gradual,” said Shellie Young Tucker of One Stop Realty in Hendersonville and 2022 President of Sumner REALTORS®.

This website uses cookies to improve your experience while you navigate through the website. Out of these, the cookies that are categorized as necessary are stored on your browser as they are essential for the working of basic functionalities of the website. We also use third-party cookies that help us analyze and understand how you use this website. These cookies will be stored in your browser only with your consent. You also have the option to opt-out of these cookies. But opting out of some of these cookies may affect your browsing experience.
Necessary Always Enabled
Necessary cookies are absolutely essential for the website to function properly. This category only includes cookies that ensures basic functionalities and security features of the website. These cookies do not store any personal information.
Non-necessary
Any cookies that may not be particularly necessary for the website to function and is used specifically to collect user personal data via analytics, ads, other embedded contents are termed as non-necessary cookies. It is mandatory to procure user consent prior to running these cookies on your website.
SAVE & ACCEPT